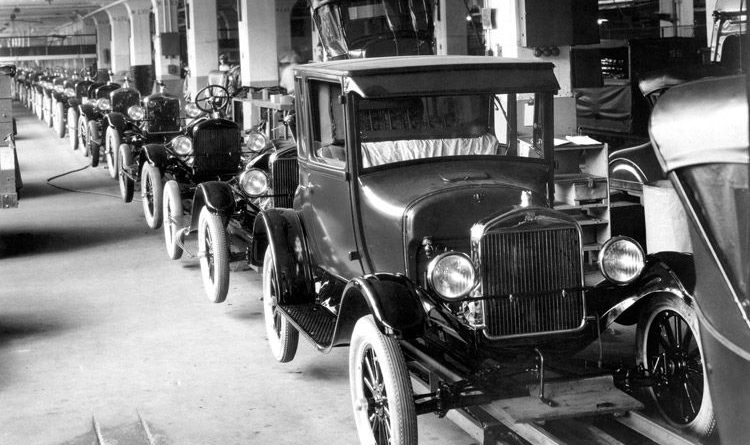 On December 1st, 1913, Henry Ford’s assembly line turned out its first Model T. A model of efficiency and safety in the workplace, Ford’s assembly line continued to churn out Model T’s at the previously unbelievable rate of one every three minutes. The only color available at the time was black, not because cars couldn’t be painted other colors, but because, until the development of fast drying lacquers in 1926, black was the only color that would dry fast enough to keep up with the manufacturing process. There are many who erroneously believe that Henry Ford invented the assembly line. In actual fact the first linear and continuous assembly line was used at the Portsmouth Block Mills in the very early 1800’s and, even earlier, in 1797, Eli Whitney, the inventor of the cotton gin, created an assembly line for the production of muskets, 10,000 of which his factory produced for the U.S. government in just two years.

Ford wasn’t even the first person to use an assembly line in the production of cars. That was Ransom Olds, who patented his assembly line process for producing the Oldsmobile Curved Dash, the company’s first mass-produced car, which began rolling off the line in 1901.

So, if Ford didn’t invent the assembly line and he wasn’t even the first to use this technology to produce cars, how did his name become so widely associated with automation? And what does any of this have to do with automated Business Process Management?

A very good case could be made that Ford simply took advantage of the accumulation of pre-requisite technologies to engineer a manufacturing system that simply wouldn’t have been possible even a few years before, and furthermore that if Ford hadn’t done it someone else would have.

Automated Business Process Management is an emerging technology very much like Ford’s continuous production line. Instead of parts, it controls the flow of tasks and information within an organization, and in doing so, manages the workflow for people within that organization rather than the flow of materials. And, just as Ford’s assembly line simply wasn’t possible until certain pre-requisite technologies were in place, so too, automated BPM wasn’t possible on a practical scale until early in the 21st century.

Before Ford could engineer his manufacturing process, a process that became known as ‘Fordism’ and that has been the model for virtually all manufacturing done today, there were a number of technologies which had to be in place. First was the concept of interchangeable parts. Up until the late 1700’s virtually everything was custom built one unit at a time. This meant that if you owned a musket, and a part broke, you couldn’t replace that part with the same part from another musket, even if it was made by the same company. The part wouldn’t fit. Secondly, there was required the concept of the assembly line itself (remember, Ford didn’t invent this). The idea that it was more efficient to bring the work to the employee, rather than bringing the employee to the work was revolutionary not too many years before the time of Ford and Olds. The final piece of the puzzle, though, Ford can take credit for: the moving assembly line. Ford’s factory was the first known use of moving assembly lines, essentially combining the idea of an assembly line with a powered conveyer belt which brought the work to the employees at a controlled and steady pace.

In the same way, until very recently, the pre-requisite technologies for automated Business Process Management simply did not exist. First, we needed a business environment in which virtually all jobs within a company required a computer. Then, we needed to network those computers so that communication between workers can be instantaneous and automatic. Third, we required a standardized method for describing any business process and finally, we had to have open source software that could make the process of engineering automated Business Process Management solutions efficient and cost-effective, obviating the need for a completely custom solution for every business – a requirement that would have put the implementation of automated BPM out of the price range of most companies.

Ford made one other very important contribution to modern manufacturing practices, one that has a significant parallel with automated Business Process Management. Ford’s most significant contribution was not so much the moving assembly line, despite the significant innovation that was, but the manner in which he organized the entire assembly process. It was this model which came to be known as ‘Fordism’ and which still forms the basis for most manufacturing today. Many people picture Ford’s assembly line as one long conveyer moving a chassis from start to completion but in fact Ford’s process was much more complex than this. Along the central assembly line were many tributary lines on which were assembled the constituent parts of the car. One line would produce steering columns, another fuel pumps and yet others assembled wheels, headlights, coolant systems and all the other parts the car required. Each of these was placed in a specific order and the assembly process timed so that the part being prepared was ready as the chassis reached that station. Furthermore, each part had to be installed within a specific time frame before the chassis moved on automatically to the next station. It was in this manner that Ford decreased the time required to assemble a car from over 12 man hours to just over 90 minutes.

Ford’s system was designed to assemble specifically the Model T. Other items that came to be manufactured in later years using the same system required their own custom engineered manufacturing process, albeit all based upon Ford’s model. In the same way, an automated Business Process Management system must be engineered by a team of qualified individuals to fit the solution required by any specific business.

In the next article, we’ll look at the tremendous competitive advantages which a properly engineered system confers on those companies who implement automated Business Process Management.